I marked an answer on this question How to get a list of broken links using Powershell? for Sharepoint 2010 as a spam, because I thought that answer is more about letting user know about the product than answering a question. This was the first time I flagged any answer as a spam. But this flag was declined with below message

flagged as spam declined - a moderator reviewed your flag, but found no evidence to support it

May be I am not sound on the practice of flagging a post as spam.

I have 2 questions on this. 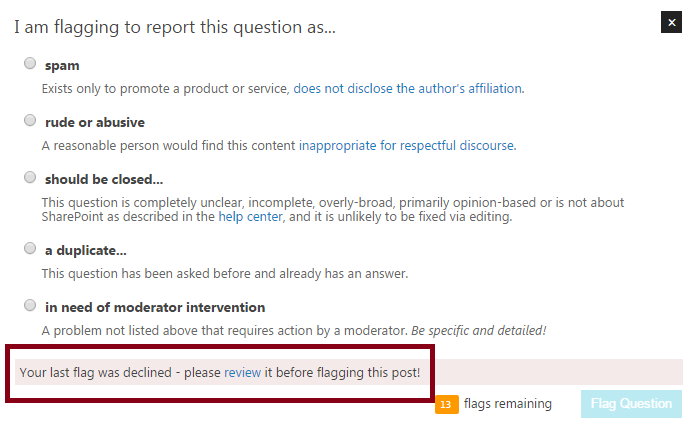 I just saw an issue like this over on the Travel site, so I'll steal my own explanation from there:

For what it's worth, spam flags are intended for use on only the most egregious cases, like "ChEaP GUCC1 BAGS HERE" or "STREEM LIVE 5PORT5 |\|0VV!" They show up with priority in the mod queue and carry a hefty reputation penalty for post authors when enough accrue (just like offensive flags). The case you described is reaaaaaalllllly on the borderline... it's obvious why you considered it spam, but it's also at least intended to be relevant to the topic, so one could argue that it's not technically the intended target for spam flags. For more info, see the community FAQ on Meta SE.

Ultimately, though, only the mod who handled the flag could say for sure what happened. Could be a difference of opinion about that borderline case, or something as simple as a misclick in the mod menu.

Not the answer you're looking for? Browse other questions tagged .

2
Is it practical to add any of this to your answer "Hope it helps. If so, please press upvote and mark as answer :-)."
1
Criteria for answering a question referring to your own solution/tool
6
Can tags effectively isolate the set of solution avenues to which I have access?
2
Flag was declined but later it was found helpfull
9
Reviewer declined flag on own post
2
Flagging content
11
Did i misunderstand anything when flagging this answer?