Using multiple accounts to get around Stack Exchange Questions limit

Is it allowed to use multiple accounts to ask questions on the same topics, in this forum to get around the limit of 6 questions per day?

I really like an explanation as to why we are not allowed to ask more than 6 questions per day. But is there actually a rule against it?

Because if you've asked 6 questions in a 24 hour period, that's a sign it's time to do some research on your own, or actually get some work done.

Seriously, that's a lot. It has nothing to do with the possible reputation gain and everything to do with the fact that this is a site staffed entirely by volunteers, who give freely of their own time and expertise to answer your questions. You're just taking advantage of that unjustifiably if you don't expend any effort to find answers to your questions on your own.

Asking this many questions is almost always a good sign that you're not putting enough effort into each question. There's no way you can research and write more than 6 quality questions in a 24 hour period. At least not if you sleep and eat and all those other things. And if you're not doing those things, then consider this question limit a public service for your health.

Moreover, keep in mind that there are other users who wish to use and benefit from the site as well. All of the questions you ask necessarily draw time and attention away from the questions posted by other users. Spreading questions out over a longer period of time gives everyone a more reasonable chance for their questions to "shine" (i.e., appear on the home page).

For example, I think, these two accounts are owned by the same person:

Evidence that these accounts belong to the same person

Example. John Gu exceeded 6 questions per day limit and had to use John John to ask the same question again 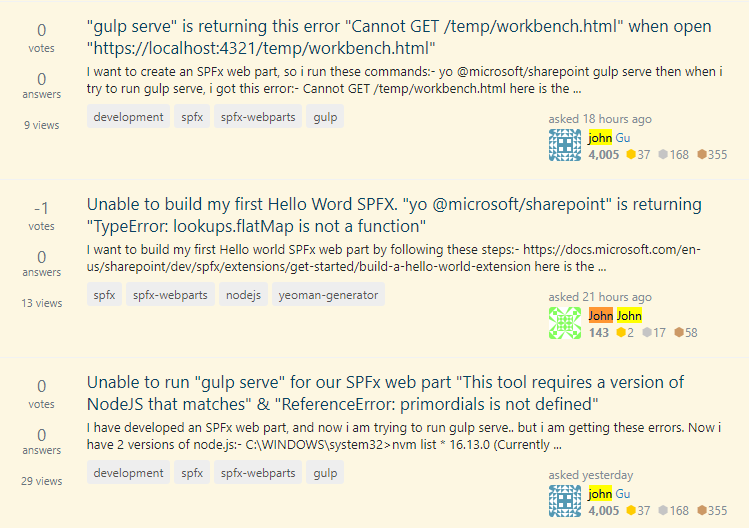 Another example. Same question about lookups and 1+ million items support

John also cross-posts the same questions to at least 4 sites at the same time. Stack Exchange, techcommunity.microsoft.com and to Microsoft's forum.

Another Example of Cross-site posting with nearly identical question

There are multiple other examples.

So what do you recommend? Everything is fine? Or something isn't right here?

5
Is it OK to ask a question you intend to answer immediately?
35
Design for SharePoint Stack Exchange
4
Is it ok to use SharePoint Stackexchange to discuss my free SharePoint solutions?
3
2013 Moderator Election Q&A - Question Collection
4
Aren't we being too hard on Community Users?
6
Can tags effectively isolate the set of solution avenues to which I have access?
8
2017 Moderator Election Q&A - Question Collection